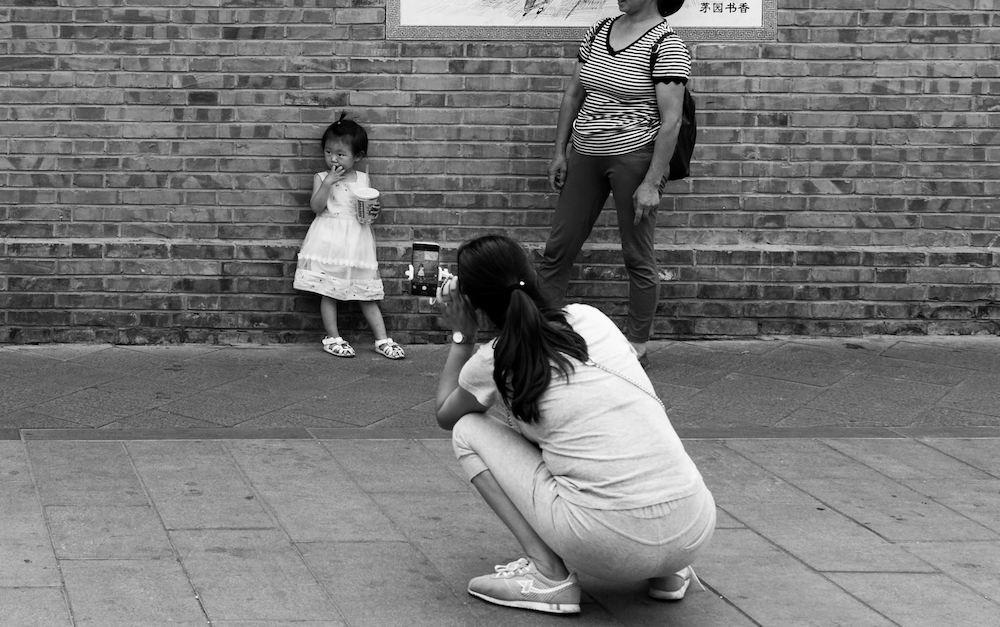 After a friend recently had a baby, I was surprised to see that her Facebook announcement did not include any pictures. Nor did any subsequent posts. A later text shared a photo with a request not to post anything online because she doesn’t want pictures of the baby on the Internet. I spoke with another friend who is making an effort not to share too much about her young daughter on social media. She explained that she wants her daughter to be able to have a choice later in life about her online identity so she refrains from posting much about her publicly or sharing photos. This is something they both thought long and hard about, even going so far as to ask friends and family not to share baby photos, which in one case caused some issues with the child’s grandparents who wanted to proudly show off their first grandchild. In a time when many new moms post weekly and monthly photo updates charting their child’s growth with Instagrammable onesies, it caused me to wonder if more parents are now making a conscious effort to avoid giving their child a digital footprint from a young age.

At the same time, my feed is often full of amusing videos of kids saying ridiculous things, having tantrums, or just being cute children whose parents are clearly proud to share updates about them with friends, family, and sometimes an even wider audience depending on their privacy settings. Celebrities create social media accounts to showcase their kids and even get branding opportunities for their babies. There are families who use social media to publicly share moments in their lives and some have gained large followings, allowing Internet users worldwide to get a glimpse into their lives and watch daily or weekly as their children grow up online. What impact is all of this “sharenting” having on kids?

A recent report from the UK Children’s Commissioner , “Life in Likes: Children’s Commissioner Report into Social Media Use Among 8-12 year olds”, provides important insight into how young people think and feel about their use of social media including interesting observations about how pre-teens learn from their siblings, gain likes and comments, and curate of online images. An important point in the report is that “Parents may be unaware of how their use of social media affects their child.” When it comes to sharenting, the report indicates that children were “uncomfortable and bothered” when their parents posted some photos. The report says this is because, “They did not want a big group of people to see them, or did not like the way they looked, while others simply did not like being pestered and pressured by parents to share photos when they did not want to.”

The report goes on to explain that some of the children interviewed said their parents would post a bad photo of them eating or in their underwear and they were concerned that people would be laughing at them as a result of their parents sharing the photo. The students in the U.K. also expressed concern that they could not do much to stop their parents from sharing about them and “felt more able to ask their friends to remove bad pictures of themselves than they could to their parents, who they felt they have relatively less influence over.”

A few years ago, FOSI did some research into “Parents, Privacy, and Technology Use.” As part of this research project, FOSI wanted to learn more about how parents think about their own digital role modeling. In the focus groups we heard from parents about their own oversharing about their kids, and in the survey 19% of parents admitted that they have posted something online about their child that the child may find embarassing in the future. We talk to kids a lot about their online reputation, but clearly from FOSI’s findings and the U.K. report, we need to get parents to think about oversharing too.

So what can you do to avoid creating too much of a digital footprint for your child or embarrassing them online? I certainly don’t think every parent needs to avoid all social media posts about their children, but some families may decide that is the approach they want to take. If you are going to share about your kids online, especially as they get older - just like we tell kids and teens - think before you post. Explore why you want to share the image and think about how your child might feel about this photo or video in the future. If they are old enough, ask their permission and let them have a say in what you share about them.

The U.K. report concludes with recommendations for the government around digital literacy education but also guidance that is needed to help parents. This includes “Help parents to recognise the impact their own relationship with, and behavior on, social media- including ‘sharenting’ videos and photos - has on their children.” Think about your own sharenting style and talk to your child about what you are posting and why. This will help you understand how much you are sharing and can enable additional conversations with your child to help them learn from an early age to think about their digital identity and positive and negative uses of social media.