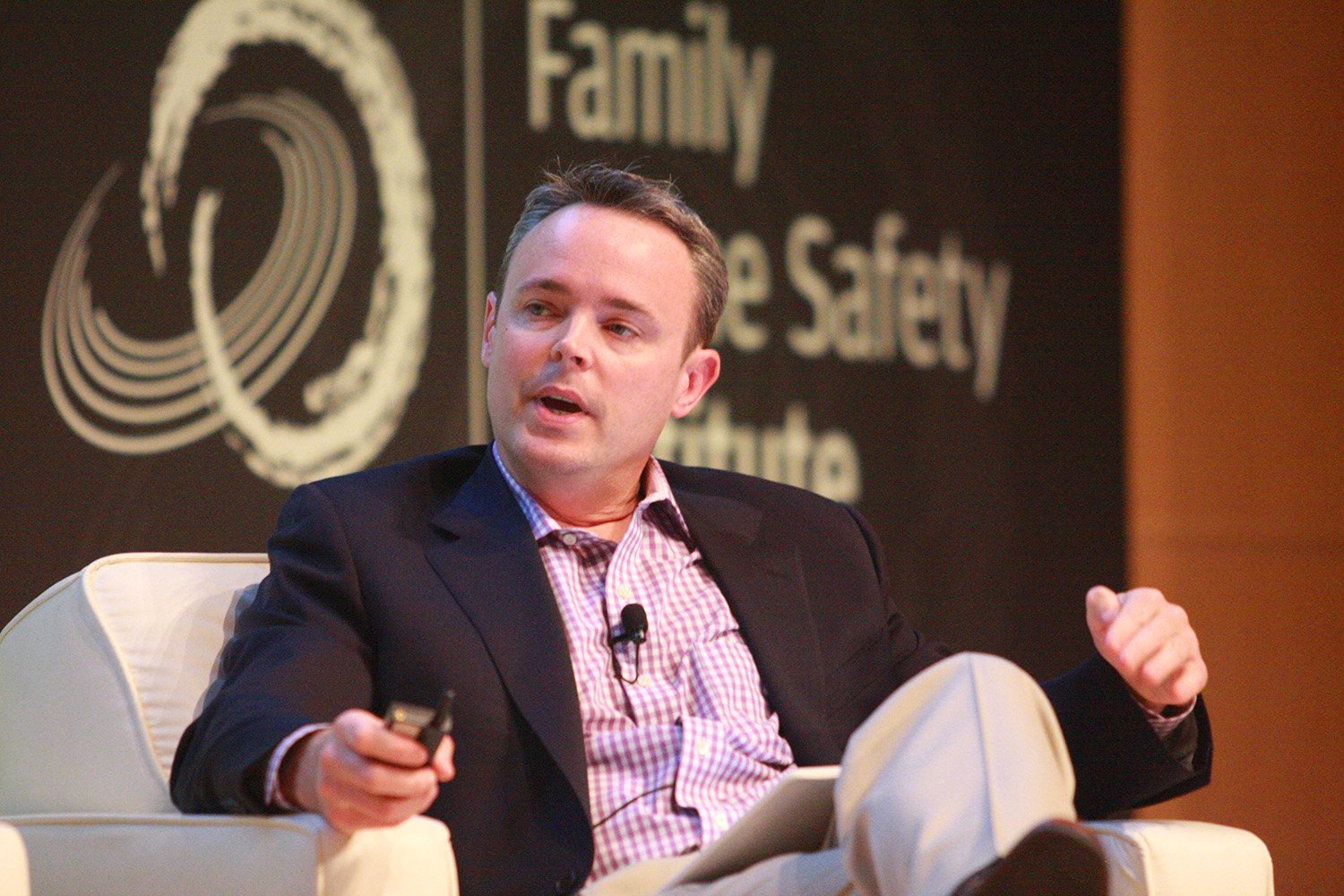 It was my great pleasure to participate in last week’s 8th annual Family Online Safety Institute conference. As a veteran of all eight annual conferences as well as a frequent participant in many other FOSI events through the years, I can say with great certainty that this year’s event was one of the very best. This organization and the diverse community of individuals and institutions it has brought together have accomplished a remarkable amount of good in a very short period of time.

But formidable challenges remain. In fact, the theme of this year’s annual event, “Redefining Online Safety,” made it clear that, in many ways, our community is still struggling to figure out exactly what it is we are all trying to accomplish.

Toward that end, FOSI asked me to join forces with Kim Sanchez, one of the sharpest experts in this field, to moderate a breakout session to consider different conceptions of “online safety” and how we might define the term going forward. We were joined by dozens of leading experts in the field and asked them to help us come up with terms and phrases that could better frame future online safety discussions.

In our breakout workshop, we asked the participants to toss our various words and phrases that they associate with “online safety.” Many of the concerns that Balkam raised were reiterated. But what was remarkable about our session is how clear it became that many experts in our field want to move away from “negative” conceptions of online safety and toward more “positive” conceptions of the term.

Here’s the way to the think of the difference between these two conceptions: “Negative” conceptions of online safety generally focus on risks and vulnerabilities whereas “positive” conceptions focus on the opportunities and benefits of online life. After our initial brainstorming session in which Kim Sanchez and I asked the audience to toss out terms, we had collected roughly 50 different words or phrases. I did my best to group similar terms together and then I assigned each term or group of terms to either the “negative” or “positive” conceptions columns. Here’s what the final result looked like: 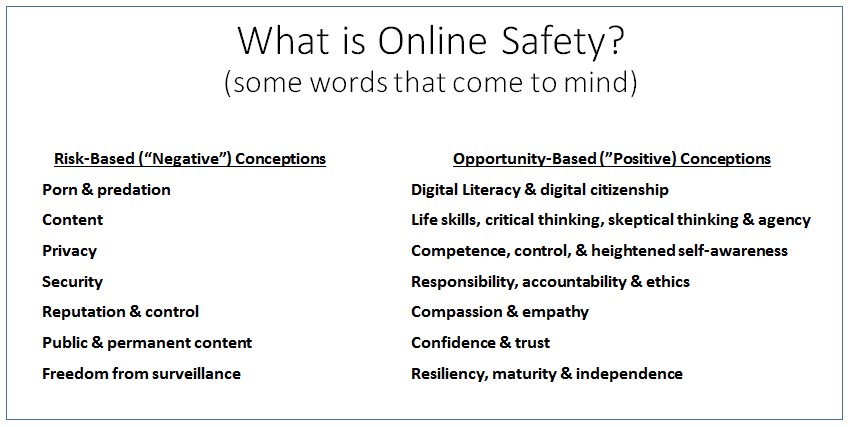 Even though these two columns look balanced, in reality, workshop participants actually suggested far more “positive” conceptions during this part of our session. That tendency to focus on opportunities and benefits carried over to our subsequent discussion of how we might define online safety in a sentence or two. Here are some of the phrases the group came up with: 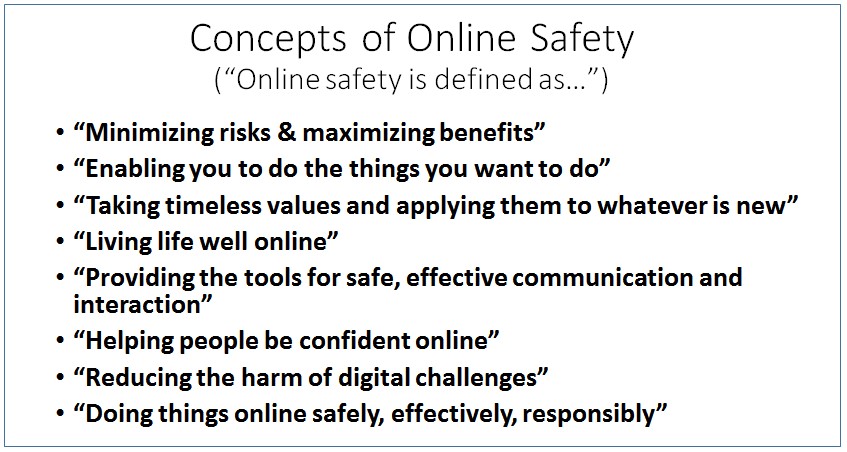 These phrases make it clear that there was strong consensus among workshop participants that “online safety” should be reconceptualized in more “positive” terms.

There was clearly some frustration among participants in this workshop – many of whom were longtime veterans of online safety debates – about the fact that the early years of these debates were dominated by fear-based terminology and messaging. In fact, after the session wrapped up and Kim Sanchez and I sat down to summarize our workshop conclusions, we were a bit concerned that we had not given enough attention to the continuing concerns about online harms or vulnerabilities when coming up with these terms and definitions. But many participants were adamant in their belief that we needed to “re-balance” the debate and encourage the public, press, and policymakers to give more thought to the ways in which we might define online safety going forward.

But are we any closer to a clear definition of “online safety”? Perhaps not, but we shouldn’t get too demoralized by that fact. As I noted when presenting our findings to the entire FOSI conference audience , there have been at least a half dozen “blue ribbon” online safety task forces that have been convened since 2000 to study these issues. Hundreds of experts participated in those efforts and countless hours of testimony and pages of evidence were collected. (Here’s a short paper I wrote in 2009 that summarized the conclusions reached by some of those task forces.) Remarkably, however, these task forces never produced a clear, consensus definition of “online safety.”

In fact, to the best of my recognition – and I was a member of many of these task forces or followed their activities closely – the question of what we meant by “online safety” really didn’t get much serious consideration. In most cases, these task forces simply jumped right into the specific question of how to define particular risks or vulnerabilities. For example, some of these task forces did make an attempt to define what constituted “objectionable content” or “predation” in the first generation of these debates and then, more recently, what constituted “cyberbullying” or “harassment.”

Going forward, I think we would be wise to listen to the way in which Stephen Balkam said he thought about “online safety” when he noted in his opening remarks that “it comes down to acknowledging risks, mitigating harms and reaping the rewards of our online lives.”

Some might claim that 3-part approach is still too open-ended, but almost every definition or conception of the term will face this problem. As Kim Sanchez remarked during our discussion, online safety is one of those “I-know-it-when-I-see-it” sort of concepts; a strict definition of the term will always remain subjective and will evolve over time.

But I also agree with the workshop participants that the time has come for us to get the public, press, and policymakers to appreciate the “positive” conceptions of what online life can be all about. For far too long, the debate about “online safety” has been preoccupied with fear. While we must continue to work together to find constructive solutions to the very real risks and harms that exist, we need to redouble our efforts to remind others that, on balance, there are good reasons to be optimistic and focus on the positive aspects of online life. 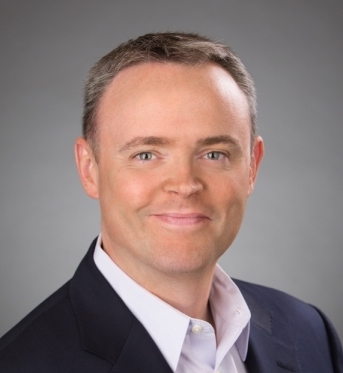 Adam Thierer is a technology policy analyst who specializes in innovation, entrepreneurialism, and internet and free-speech issues, with a focus on the public policy concerns surrounding emerging technologies. Thierer has authored or edited ten books, and served on multiple online safety task forces, including the Online Safety and Technology Working Group during the Obama administration. He is currently serving as a Commissioner on the U.S. Chamber of Commerce "Commission on Artificial Intelligence Competitiveness, Inclusion, and Innovation." He previously worked as a fellow at the Mercatus Center at George Mason University, the Cato Institute, and the Heritage Foundation.

Adam Thierer is a technology policy analyst who specializes in innovation, entrepreneurialism, and internet and free-speech issues, with a focus on the public policy concerns surrounding emerging technologies. Thierer has authored or edited ten books, and served on multiple online safety task forces, including the Online Safety and Technology Working Group during the Obama administration. He is currently serving as a Commissioner on the U.S. Chamber of Commerce "Commission on Artificial Intelligence Competitiveness, Inclusion, and Innovation." He previously worked as a fellow at the Mercatus Center at George Mason University, the Cato Institute, and the Heritage Foundation.